Wisconsin maintains several specialized response teams that can be requested through the Wisconsin Emergency Hotline.

The ALERT initiative began in 2004 as a way to build a network of law enforcement specialty teams that could provide enhanced response to events that overwhelm local capacity. The mission is to provide armed, tactical response in environments containing Weapons of Mass Destruction (WMD) and/or acts of terrorism and to provide a resource for mutual aid to jurisdictions in need of additional tactical capabilities and specialty teams. The ALERT initiative is comprised of local law enforcement tactical and explosive ordnance disposal (EOD) teams representing each of Wisconsin’s seven Emergency Police Service (EPS) areas. The initiative includes eight Special Weapons and Tactics (SWAT) regional teams involving ten law enforcement agencies and five regional BOMB teams involving eight agencies that have signed agreements to participate and adhere to guidelines and strict training requirements. The teams are able to respond anywhere in the state when necessary.

The following maps indicate the designated areas of responsibility for requesting resources from the Tactical Teams and Bomb Squads. The Dive teams are not divided into areas to allow a better response as many of the teams will incorporate resources and teams jointly in their responses. Contact can be made to the closest response agency. 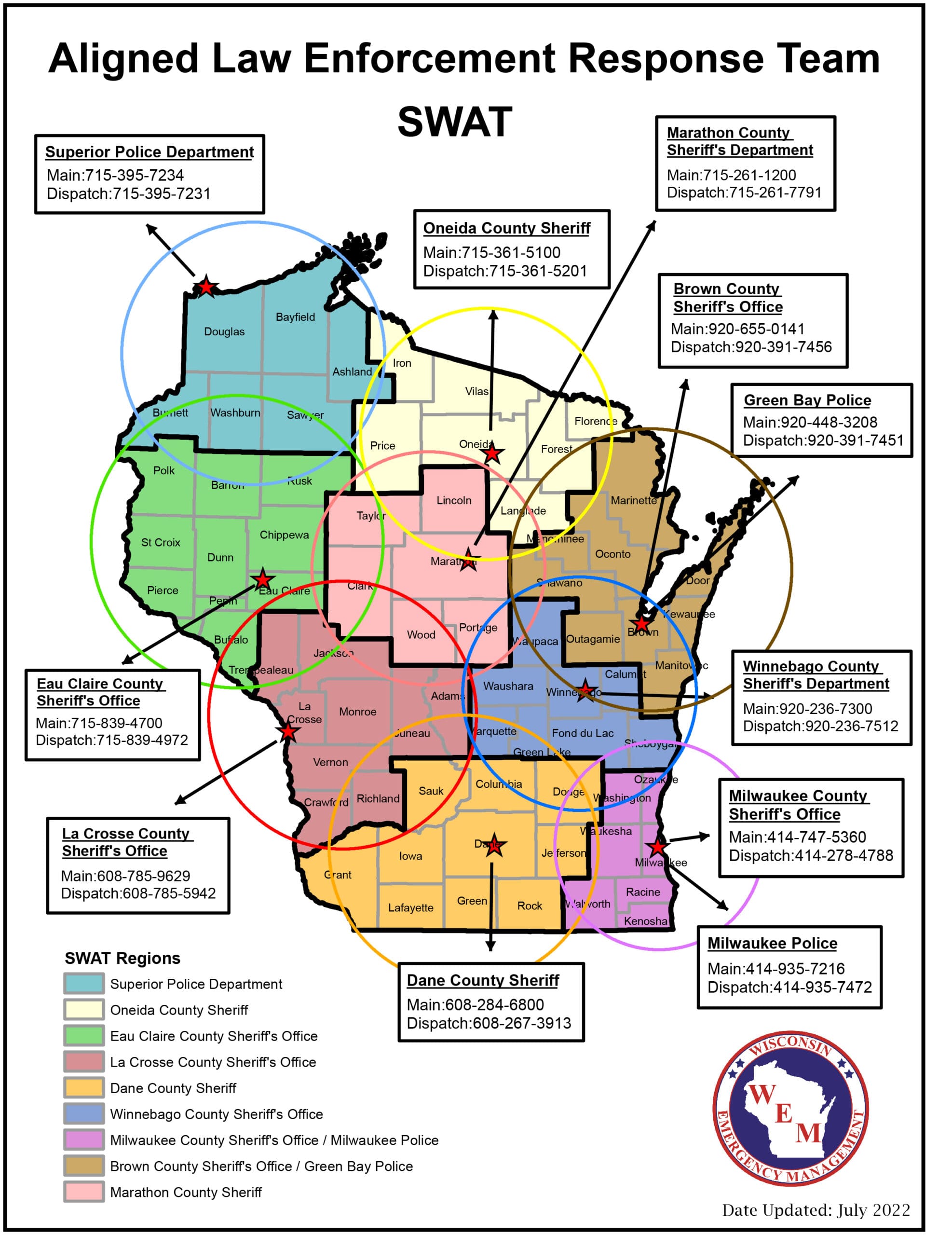 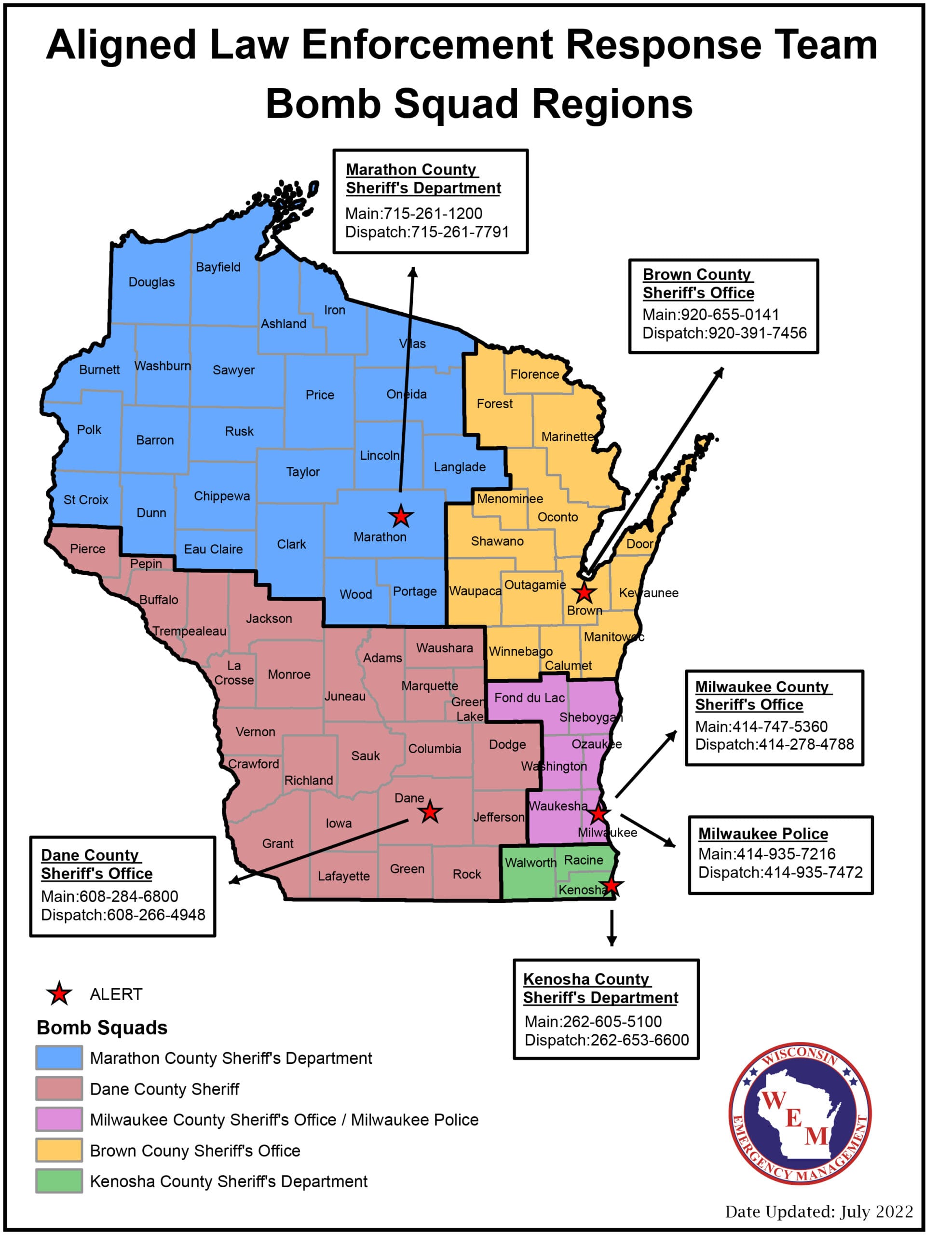 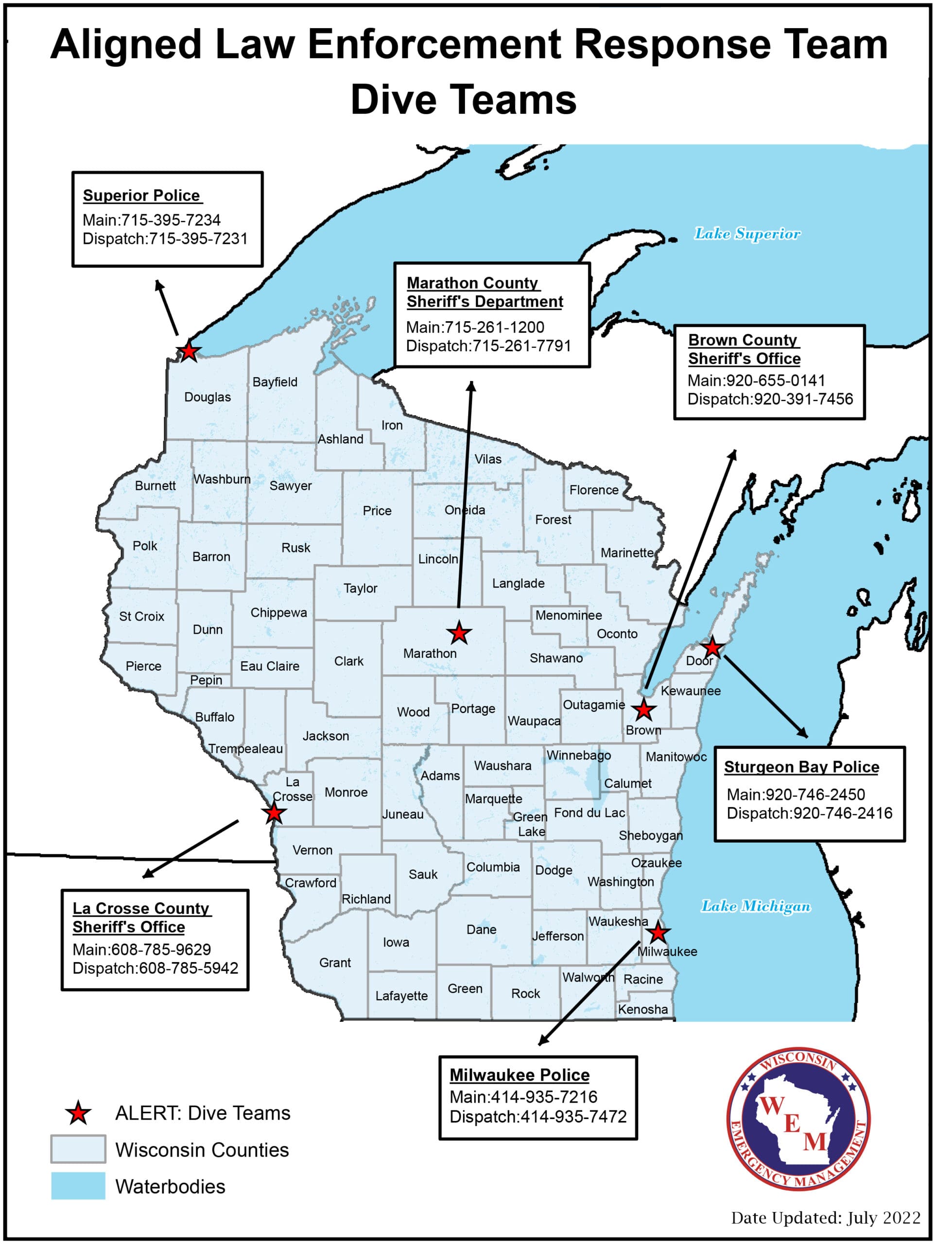 The Wisconsin Complex All-Hazard Incident Management Team (AHIMT) is a multi-agency, multi-jurisdiction team for extended all-risk incidents. The Team’s approach is to successfully support or manage major incidents requiring a significant number of local, regional, state and possibly federal resources. This could include incidents such as tornados, earthquakes, fires, floods, search and rescue, multi-day situations or planned mass-gathering events. The purpose of the AHIMT is to assist any jurisdiction confronted with an incident beyond its capabilities in either complexity or duration. The AHIMT is staffed by qualified personnel covering 16 different organizational functions. Team members come from a broad cross section of disciplines including: law enforcement, fire, EMS, public works, emergency management, public health, finance, forestry, general administration and much more. Members are required to maintain a certain level of base and advanced training, qualifications and experience through their home agency. The Team is a modular organization that can expand or contract its organizational structure and staffing based on the request of the local jurisdiction. Under Incident Command, deployment of a standard team includes Safety, Liaison, Public Information, Finance, Planning, Operations and Logistics. More staff positions are available if needed.

Other services available from the team:

The Wisconsin Cyber Response Team (CRT) is a volunteer emergency response group administered by    Wisconsin Emergency Management and facilitated through the Department of Military Affairs. Comprised of cybersecurity and information technology professionals at the ready, the CRT supports critical infrastructure in the event of a cyber incident within the State of Wisconsin.

To provide support for critical infrastructure in the state of Wisconsin in order to prevent, mitigate, and respond to cyber incidents through assessments, training, and incident response. 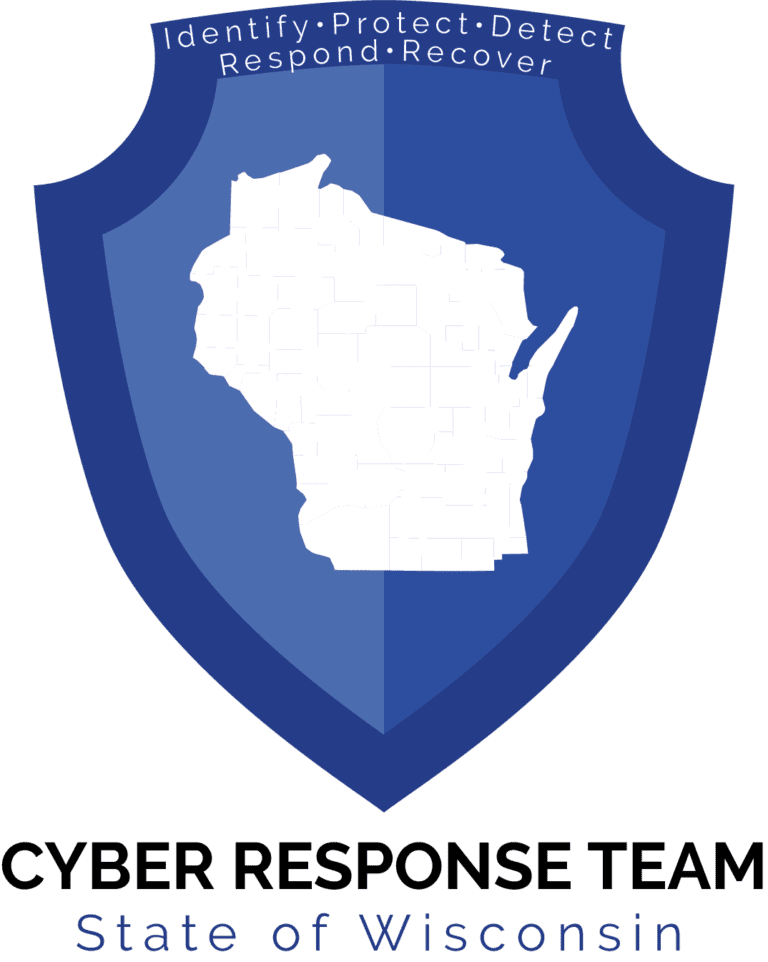 Coordinated response effort from the Wisconsin volunteer Cyber Response Team (CRT) and National Guard, assisting in both preventing and responding effectively in the event of an emergency.

Joining the CRT will develop technical skills to assist with:

The statewide Wisconsin Hazardous Material Response System (WHMRS) is intended to assist communities (or regions) who have been overwhelmed by the effects of a hazardous material emergency/release by providing specialized hazardous material resources to aid the stricken communities in incident stabilization and hazard mitigation activities. The focus of the statewide system is to provide quick strike capability to ensure incident assessment, stabilization, and mitigation, thus reducing the threat to the public, responders, and the environment.To provide a high level of hazardous materials response capabilities to local communities, Wisconsin Emergency Management contracts and manages twenty-one Regional Hazardous Materials Response Teams. The teams are divided into Task Forces: Northeast Task Force, Northwest Task Force, Southeast Task Force, and the Southwest Task Force. These Task Forces are then divided into Type I, Type II, and Type III teams, all with complimentary capabilities and training requirements.The WHMRS may be activated for an incident involving a hazardous materials spill, leak, explosion, injury or the potential of immediate threat to life, the environment, or property. The WHMRS responds to the most serious of spills and releases requiring the highest level of skin and respiratory protective gear. This includes all chemical, biological, or radiological emergencies.Several counties have Type 4 Hazardous Materials Response Teams.  These county teams respond to chemical incidents which exceed the capabilities of local fire departments but do not require the specialized training or equipment of WHMRS teams. County teams may also provide assistance to surrounding counties. 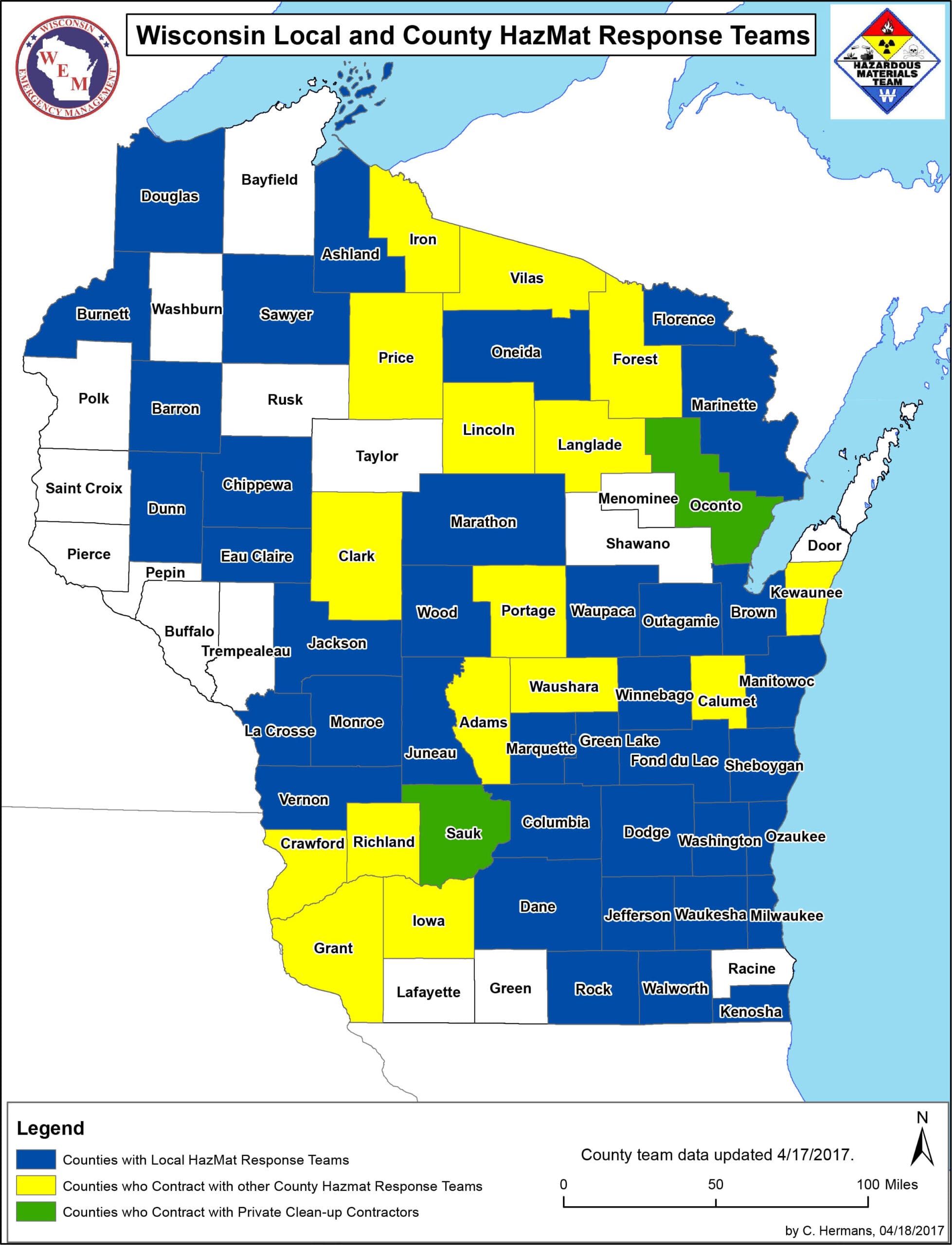 Wisconsin’s Urban Search and Rescue Task Force (WI-TF1) is a team of individuals specializing in urban hazard mitigation, search and rescue, and incident stabilization. While their emphasis is the location and extrication of victims trapped in collapsed structures or confined spaces, the task force is capable of responding to state and national disasters including earthquakes, hurricanes, tornadoes, floods, and man-made technological and terrorist events. WI-TF1 is a response asset owned and managed by Wisconsin Emergency Management (WEM), funded through federal Homeland Security funds.

WI-TF1 is comprised of more than 140 highly-trained personnel including structural engineers, canine handlers, technical search specialists, doctors, and advanced rescue personnel. Many of the members of WI-TF1 are firefighters with local fire departments that have an agreement with WEM to make their personnel available for training and deployment. The participating fire departments are reimbursed by the State when their personnel are participating in WI-TF1 activities. There are currently eleven fire departments that have agreements with WEM for participation on the task force. These are: Antigo, Appleton, Beloit, Chippewa Falls, Green Bay, Janesville, La Crosse, Menomonie, Neenah-Menasha, Oshkosh, and Superior. A number of instructors and other personnel assigned to the Regional Emergency All Climate Training (REACT) Center are also members of the Task Force or provide support services.